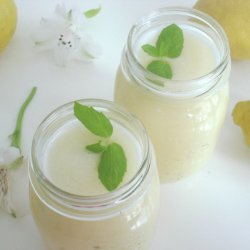 Næste indlæg
Summer and lemonade go hand in hand – at least in my mind. There are a few different ways of mak

The first time I tried a piece of red velvet cake was when I lived in New York. It was from a lovely little coffee shop around the corner from my apartment on East 4th street. And I loved it. It was pretty and delicious at the same time. Uhh they also had the best Iced Chai Latte in the world! That’s definitely on my list of things to enjoy whenever I get back to New York. Oh how I miss it!

We were invited to a 4th of July party in the park by some of Sillas’ good friends he’s known since high school. And I thought that this was a great opportunity to bake a batch of red velvet cupcakes, with frosting in both blue and white – keeping with the US theme. So much fun to play around with colors!

Ingredients for the frosting:

Put the butter and the sugar in a freestanding electric mixer with a paddle attachment (or use a handheld electric whisk) and beat on medium speed until light and fluffy and well mixed. Turn the mixer up to high speed, slowly add the egg and beat until everything is well incorporated.

In a separate bowl, mix together the cocoa powder, red food coloring and vanilla extract to make a very thick, dark paste. Add to the butter mixture and mix thoroughly until evenly combined and colored.Turn the mixer down to slow speed and slowly pour in half the buttermilk.

Beat until well mixed, then add half the flour and beat until everything is well incorporated. Repeat this process until all the buttermilk and flour have been added. Scrape down the side of the bowl again. Turn the mixer up to high speed and beat until you have a smooth, even mixture. Turn the mixer down to low speed and add the bicarbonate of soda and vinegar. Beat until well mixed, then turn up the speed again and beat for a couple more minutes.

Spoon the mixture into the paper cases until two-thirds full and bake in the preheated oven for 20 to 25 minutes.

And as for the frosting:

Make the frosting by beating the icing sugar and the butter together on medium-slow speed until the mixture comes together and is well mixed. Add the cream cheese in one go and beat it until it is completely incorporated. Turn the mixer up to medium-high speed. Continue beating until the frosting is light and fluffy, at least five minutes.

Now take a third piping bag, add the nozzle of your choice.

Take the two piping bags with frosting and cut a small bit off of each end.

Carefully place both bags of frosting into the third, making sure that they evenly divided.

And now you are ready to pipe your cupcakes. 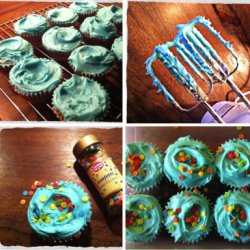 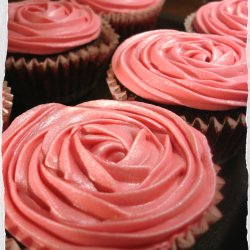 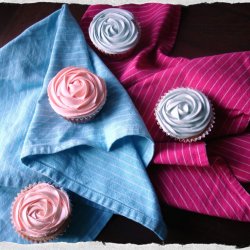 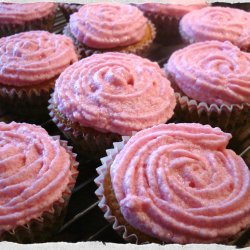 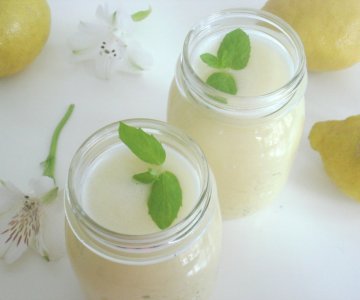 Summer and lemonade go hand in hand – at least in my mind. There are a few different ways of making your own lemonade. Today …
Næste indlæg